Coercion of Unification Church donations in Japan is a problem: ex-executive

The Unification Church is ‘clearly acting against public morals’ as it imposed an unreasonable donation quota on its churches across Japan, bankrupting many followers, a former senior leader of the group told Kyodo News. religious.

In a rare interview given by a former executive member of the group under his real name, Masaue Sakurai, former deputy director of the group’s family education department, said the Unification Church was supposed to promote peace in the world, but began to emphasize organizational expansion around the 1980s and its requests for donations grew stronger.

The group, founded in South Korea in 1954 by the late Sun Myung Moon, is the subject of renewed attention in Japan after the assassination of former Prime Minister Shinzo Abe in early July by the son of a follower.

Photo taken on July 13, 2022 shows a building housing the Unification Church, now officially known as the Family Federation for World Peace and Unification, in Tokyo. (Kyodo)

The Unification Church began to stir controversy in the 1980s with “spiritual sales,” in which people were coerced into buying jars and other items at exorbitant prices using threats , including the invocation of “ancestral karma”. It also drew notoriety for mass wedding ceremonies with some Japanese celebrities attending one held in Seoul in the 1990s.

Sakurai, 48, said his father was a former president of the Unification Church in Japan, now known as the Family Federation for World Peace and Unification, while his mother was a believer since the late 1950s, even before the group was incorporated as the nation’s religious organization.

He worked for twenty years at the group’s Japanese headquarters. Whenever asked for advice on family upbringing, he was always faced with the question of donations, Sakurai said.

Some followers have even donated savings their children have earned from part-time jobs to help them go to college.

Sakurai, who declined to be photographed, said he had long felt uncomfortable with the situation but could not speak out for fear of appearing to lack faith.

He also said that due to donation quotas imposed by headquarters on regional churches, many families had gone into debt or bankruptcy.

“Many people at headquarters were aware that the issue of donations was a problem,” he said.

His remarks about the group’s pressure on subscribers to make huge donations matches what Tetsuya Yamagami, Abe’s abuser, allegedly told investigators about how his mother’s massive donations, worth 100 million yen ($716,000), had ruined his family. Yamagami, who shot and killed Abe, believed the former prime minister had ties to the group.

Since the July 8 assassination, the ties between politicians, especially those of the ruling Liberal Democratic Party, and the Unification Church, whose founder was a staunch anti-Communist, have become the focus of social attention. .

Responding to strong public unease over such ties, Prime Minister Fumio Kishida said on Wednesday that the LDP will ask its lawmakers to sever ties with the Unification Church.

Sakurai said that although he was an executive, he did not belong to the donations department and therefore did not have access to details, such as the percentage of donation goals achieved by each church.

He also denied any knowledge of the details of the Unification Church’s involvement in politics or how the group’s name change was approved in Japan in 2015.

Sakurai became involved in issues related to followers’ families and the education of second-generation followers at headquarters in 1998. He was fired in 2017 when he objected to the group’s policies.

Before giving the interview, he provided the press with a document entitled “The current situation of the faithful and the fundamental problems of the Federation of Families”. He agreed to be interviewed because “there is no sign of a change in the nature” of the group. 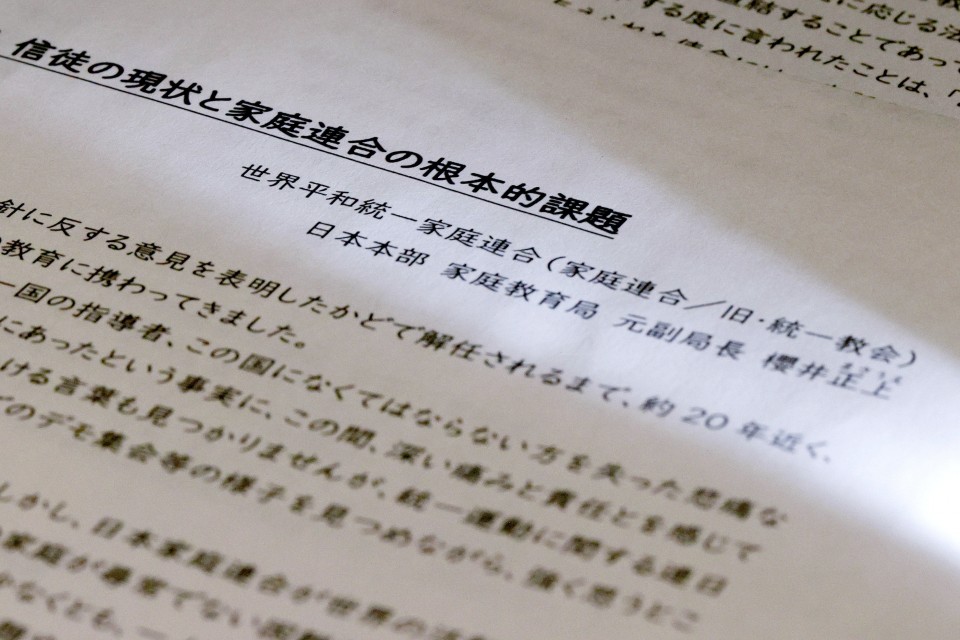 File photo taken on September 2, 2022 shows a document provided to the press by Masaue Sakurai, former deputy director of the Unification Church’s family education office, titled “The current situation of the faithful and the basic problems of the Federation of Families”. (Kyodo)

The Unification Church “needs to admit there is a problem and reform internally,” Sakurai said, adding, “There are a lot of people who want (the group) to change.”

A spokesperson for the group told Kyodo News that it was “inappropriate for someone who left the organization to speak about it.”

Over 100 Japanese lawmakers had ties to Unification Church: investigation

Church in the world: press briefing