Much weighs on Stephen Clyborne’s heart these days. It doesn’t matter that he’s preparing for bypass surgery, likely in May, after a heart attack in late February, but he’s also thinking a lot about his role at one of Greenville’s oldest churches during one of the biggest stages. Of the history.

“I have this crushing burden of responsibility all the time, especially as we prepare for this centennial,” says Reverend Dr. Clyborne, 62, the 11th pastor of Earle Street Baptist Church. “One of the things we’ve done is rediscover a sense of our church’s history and go back and realize the spirit of adventure and the missionary spirit of our spiritual ancestors.”

These ancestors came from Central Baptist, founded in 1893 on Rutherford Street, north of Stone Avenue. Around 1913, Central decided to establish a “mission church” in the then wild lands of Earle Street, about a mile away.

Earle Street Baptist Church was born March 12, 1922 in a tent on Earle and Robinson streets.

“The multitude gathered to witness the establishment of the new church was so great that the tent was filled, while many stood outside,” according to a contemporary newspaper account. The clipping went on to quote a Dr. WT Derieux addressing the 117 founding members, 84 of whom were from Central Baptist.

“’Unity among the members of the church is essential to progress; division means obstruction of its work,” the secretary of the Baptist Mission Board of South Carolina told congregants at the 17th Baptist Church in Greenville.

In 2002, declining membership forced Central Baptist to close; today the building at 37 Pinckney Street in the Hampton-Pinckney Historic Preservation Area is home to the Grace Baptist Fellowship.

In the 1980s, the daughter church nearly closed, as the beautiful homes of Colonel Elias Earle’s historic district fell into exodus and suburban neglect – before the downtown revival. 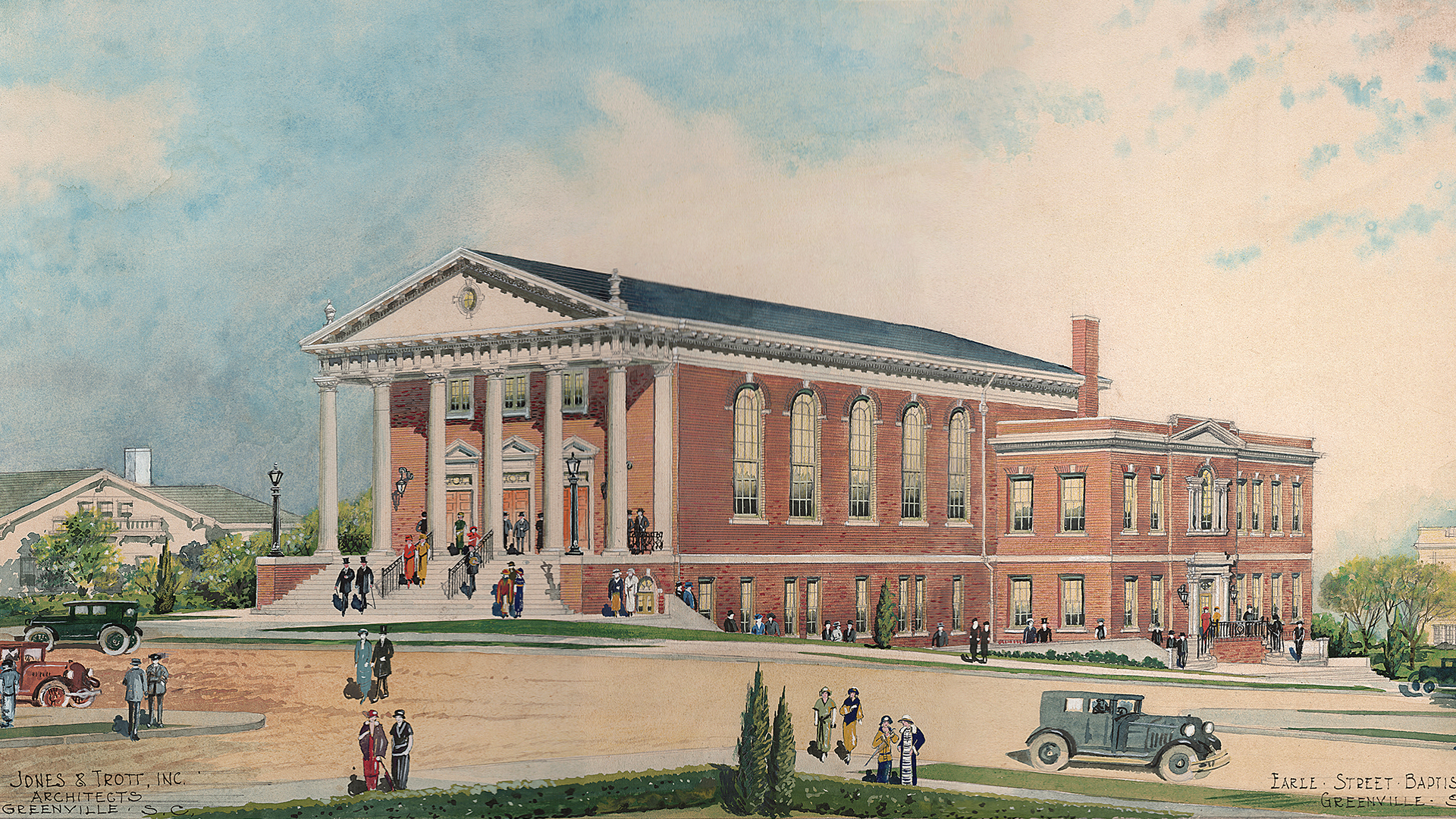 Rev. Dr. Jim Wooten returned to his hometown of Greenville in 1987 after First Baptist Winnsboro, in part to help with the existential challenges of ESBC.

When he talks about how the congregation came together to save the church, he seems to echo Derieux’s sermon a century ago. And he checks the name of Jean Cochran, who joined the church with her husband, Lenwood, in 1952. Cochran also chaired the first long-range planning committee in the late 1980s and was ordained the first female deacon. of the church – unheard of at the time.

Of Cochran, who died last year, Wooten says, “She said the key was to reconnect the community.”

So that’s what the church has done. Wooten says he started these 4th of July parades along Earle Street in the 1980s to reconnect with the neighborhood. Neighbors decorated their bicycles and carts. Flatbed trucks and the fire department would join them. The community enjoyed a picnic and music. The pandemic has put a pause on parades, but the church is also offering fall festivals, neighborhood Christmas carols and more.

Today, Clyborne sees a healthy future for its flock of some 950 registered parish rolls and some 500 active worshippers.

“One of the things we’ve done is rediscover a sense of our church’s history,” he says. “The church feels very strongly that it is up to us to pass on the spirit of adventure that made our church possible 100 years ago. There is a real dynamism in our church.

July 25, 1922: Beginning of the construction of the sanctuary.

October 1922: The church begins to meet in a house on Wilton Street until the construction of the church is completed.

October 1950: Northgate Chapel is organized as a Baptist church.

1951: Completion of the school building.

1983: ESBC listed on the National Register of Historic Places.

1996: Construction of the Family Life Center.

July 2018: Dedicates a new addition to the Education Building. 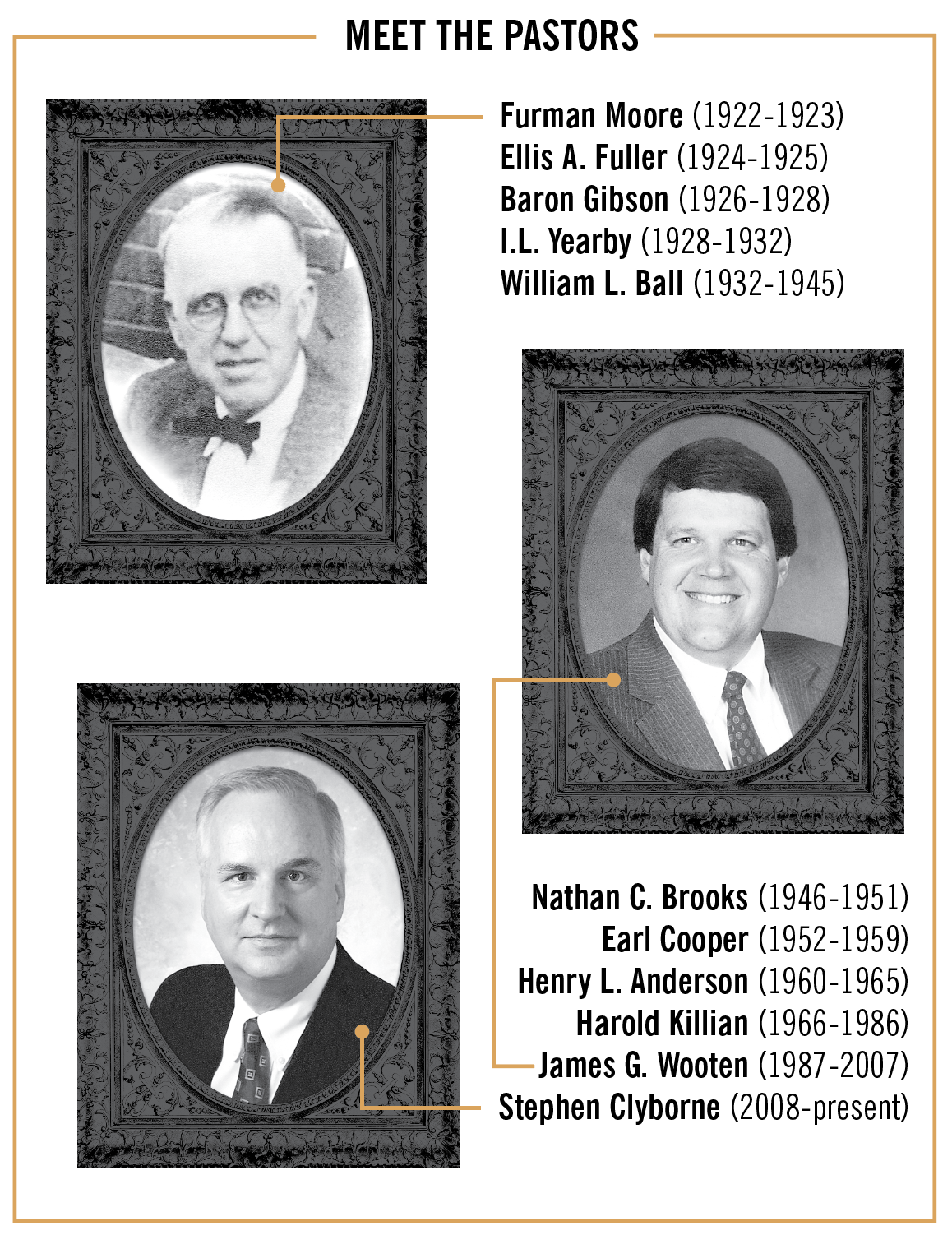 Furman Moore (1922-1923): The first pastor came from the South Carolina Baptist Convention. He resigned due to health issues.

IL Yearby (1928-1932): From First Baptist Church in Tarboro, North Carolina, he served at the ESBC until moving to First Baptist of El Paso, Texas.

Earl Cooper (1952-1959): “Earle Street was especially strong and vibrant under the leadership of Dr Cooper,” the church history says. He founded “Lessons for Living”, a weekly Saturday morning show on WFBC-TV (now WYFF).

Harold Killian (1966-1986): “Tour. Killian brought calm and steady leadership, warmth and compassion to the church,” the church says of the North Carolina native who studied at the universities of Wake Forest, Princeton, Columbia and Furman, as well as the Southern Baptist Theological Seminary.

James G. Wooten (1987-2007): “Jim Wooten was the right person to usher in a new era of progress,” the church says. He had also served as pastor in Laurens, Winnsboro and Beaufort.

Stephen Clyborne (2008-present): Associate pastor at ESBC from 2002 to 2007, he succeeded Wooten in January 2008. At the time of his interview with The Greenville Journal, he was preparing for double bypass heart surgery.

5K runners do their part to raise money for Claverley Church