On Sunday, June 26, the First United Methodist Church (FUMC) in Tupelo, Mississippi, acknowledged the retirement of Rev. Dr. Embra K. Jackson, Jr., an ordained elder as senior pastor. It was a bittersweet time for Jackson, who came to FUMC Tupelo on July 17, 2019 as the first African-American pastor, marking one of his most notable historic moments in 150 years.

The reaction of members of his congregation when he was installed was much better than he expected. “After Embra Jackson, Jr.’s first Sunday as the first black senior pastor of a predominantly white church, many of us knew and felt we had a gifted preacher, caring pastor, and healing leader who would change lives. We have never been disappointed,” said Joe Edd Morris, a retired Methodist minister, psychologist and author.

In an interview with WCBI-TV (Columbus) in 2019, Jackson said, “I was overwhelmed by the reaction I received not only on my first Sunday, but when the announcement was made that I would be Senior Pastor here I got phone calls, letters…food, kind words and the reception on Sunday was just overwhelming. The many ways the congregation showed their appreciation for him and the work he did never ceased, until the retreat reception they hosted on the last Sunday in June inviting members of the church, family and friends.

FUMC members had nothing but good things to say about Jackson through cards, notes, gifts, personal thanks and well wishes.

“Embra, you have been a superstar for our congregation… We will cherish these three years with you. There is no way to thank you for everything you have done,” said Raymond Jourdan, Parish Relations Manager.

According to Neville Vanderburg, “In the years that I have known him, Embra constantly demonstrates the fruit of the Holy Spirit: love, joy, peace, patience, kindness, kindness, faithfulness, gentleness and self-control. I’m proud to call him my friend.

Joe and Polly Baily agreed that Jackson arrived just before the most trying time for The United Methodist Church in 50 years. The Baileys went on to say, “The pandemic was about to begin and the largest church threatened to fracture over theological issues. Embra navigated these and other questions with wisdom and grace, while preaching that trusting in God and following the teachings of Jesus would set us free from many of life’s problems. They credit his daily devotions and use of social media for keeping the church going when members were unable to meet in person. “Embra is a wonderfully gifted pastor, a peerless orator, and in every way a Christian gentleman who is a true servant of the Lord.”

Jack Reed, Jr. recounted that in 1963 the front page of The Wall Street Journal ran a story of FUMC Tupelo welcoming black worshipers as one of the most significant events in the history of the country’s ongoing opening of traditional white churches to black citizens. Reed went on to say that it’s no surprise that FUMC Tupelo is a congregation. Bishop James Swanson felt confident to appoint Rev. Dr. Embra Jackson to serve. “Thank God he did. Our congregation has benefited so much from Embra’s leadership over the past few years…We were disappointed to learn of her retirement, but we certainly respect her wish to spend more time with her family.

What makes the fact that Jackson was selected to serve with the FUMC truly significant is his journey which began with his matriculation at Tougaloo College (Jackson, Mississippi), known for its civil rights activism during a turbulent time in the Mississippi where the focus according to Jackson “was to lift people up.”

After earning a bachelor’s degree in political science from Tougaloo College in 1974, Jackson earned graduate degrees and a teacher’s certification. He earned a Masters in Public Administration from the University of Mississippi (Jackson) and an M.DIV. of the International Theological Center (Atlanta, Georgia). In 2003, he received a Doctor of Ministry (D. Min) degree from Memphis Theological Seminary (Memphis, Tennessee). He then served The United Methodist Church (UMC) in several capacities throughout Mississippi as pastor of several churches, and from 2005-2011 served as administrative assistant to Bishop Hope Morgan Ward, South Jurisdiction. is of The United Methodist Church. Additionally, Jackson served as executive director of United Methodist Metro Ministers (Jackson) and chaplain of Hospice Ministries, Inc. (Ridgeland). Immediately prior to his FUMC appointment from 2011 to 2019, Jackson served as the UMC District Superintendent of the Starkville District.

Jackson possesses ecclesiastical endorsement from the Council on Higher Education and Ministry. He is a certified coach by the International Coach Federation and CoachNet, and recently wrote his first book. Inspired by members of his church, particularly Joe Edd Morris, Jackson released Forty Days in the Covid Wilderness: Meditations of Hope (2022) after it was brought to his attention that the devotions he shared at the start of the pandemic were so meaningful to many. people struggling with isolation and fear. He is already preparing his second book which chronicles his journey as the first African-American senior pastor of the predominantly white FUMC Tupelo.

Jackson is not the first clergyman in his family. He is the grandson of a Baptist preacher, the Reverend Harrison P. Jackson, who lived and pastored for many years in the community of West Jackson and surrounding rural towns. He is the son of Embra K. Jackson, Sr. and Allie D. Foster Jackson, both deceased, of Jackson, Mississippi. He and his wife Rosia are the parents of four adult children and six grandchildren all residing in Brandon, Mississippi, where they will retire to be closer to family. 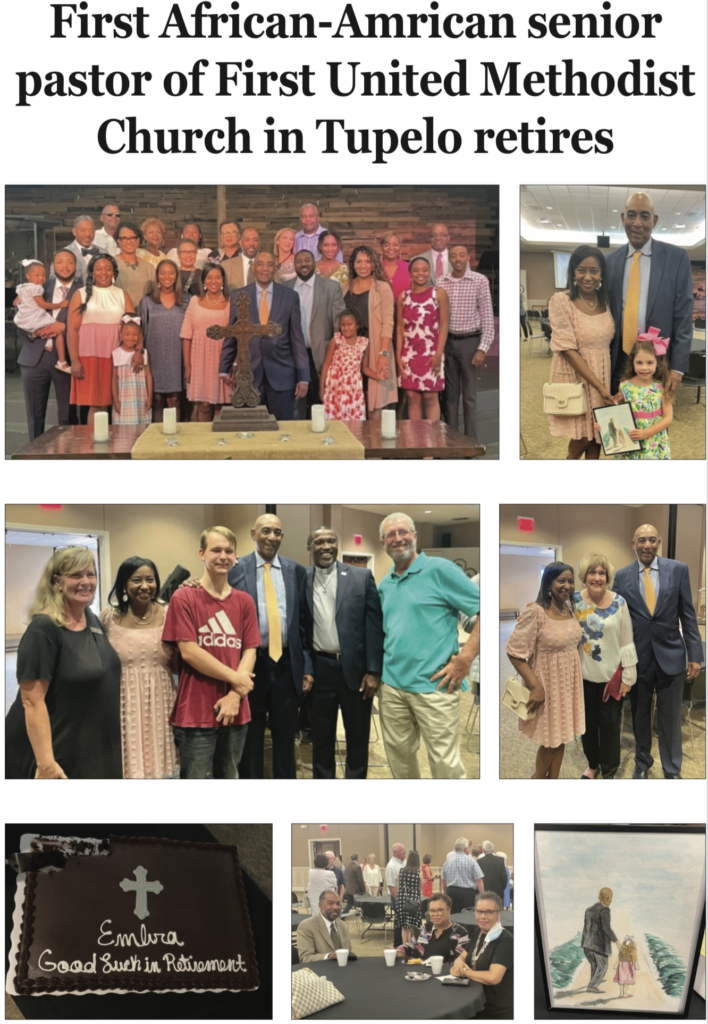